"Zarf is a tool to help deploy modern stacks into air gapped environments; it's all about moving the bits." — Jeff

Zarf is a free and open-source tool that simplifies the setup & deployment of applications and resources onto AirGap or disconnected environments. Zarf equips you with the ability to quickly and securely deploy modern software onto these types of systems without relying on internet connectivity.

It also simplifies the installation, updating, and maintenance of DevSecOps capabilities like Kubernetes clusters, logging, and SBOM compliance out of the box. Most importantly Zarf keeps applications and systems running even when they are disconnected.

* Check out our glossary for an explantion of common terms used in the project.

Zarf simplifies and standardizes the delivery of complex deployments. Giving users the ability to reduce tens / hundreds of individual software updates, movements, and manual installations to a few simple terminal commands. The tool equips users with the ability to pull, package, and install all the resources their applications or clusters needs to run without being connected to the internet. It can also deploy any necessary resources needed to stand up infrastructure tools (such as Terraform).

A typical Zarf deployment is made up of three parts

Zarf's possibilities are endless—Zarf developers' time is not. Thus, scope definition is in order.

Here are the things we think Zarf should get really good at, listed top-down in order of importance:

What can be packaged?​

To reiterate: Zarf's possibilities are endless—Zarf developers' time is not. Thus, scope definition is again in order.

Given Zarf's being a "k8s cluster to serve other k8s clusters", the following types of software can be rolled into a Zarf package:

How To Use Zarf​

Zarf is intended for use in a software deployment process that looks something like this:

Zarf can pull from lots of places like Docker Hub, Iron Bank, GitHub, local filesystems, etc. but you have to make sure that Zarf has a clear path & appropriate access credentials. Be sure you know what you want pack & how to access it before you begin using Zarf.

This part of the process requires access to the internet. You feed the zarf binary a "recipe" (zarf.yaml) and it makes itself busy downloading, packing, and compressing the software you asked for. It outputs a single, ready-to-move distributable (cleverly) called "a package".

Find out more about what that looks like in the Building a package section.

(2) - Ship the Package to system location​

When it comes to remote / constrained / independent / air gapped systems, everyone's unique. Zarf doesn't have an opinion as to how packages move just so long as you can get them into your downstream environment.

Once your package has landed you will need to:

Zarf allows the package to either deploy to an existing K8's cluster or can spin up a local cluster (K3s) to deploy you package to. This is a configuration that is available on deployment in the init package. 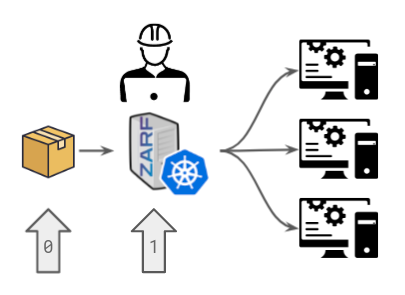 In the simplest usage scenario, your package consists of a single application (plus dependencies) and you configure the Zarf cluster to serve your application directly to end users. This mode of operation is called "Appliance Mode"— because it's small & self-contained like a kitchen appliance—and it is intended for use in environments where you want to run k8s-native tooling but need to keep a small footprint (i.e. single-purpose / constrained / "edge" environments). 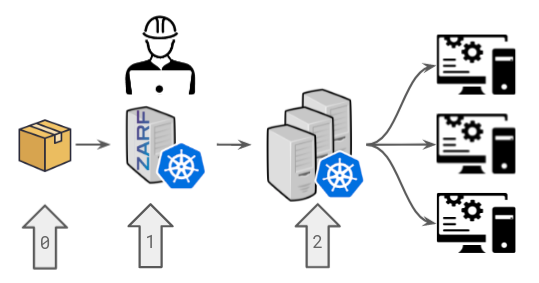 In the more complex use case, your package consists of updates for many apps / systems and you configure the Zarf cluster to propagate updates to downstream systems rather than to serve users directly. This mode of operation is called "Utility Mode"—as it's main job is to add utility to other clusters—and it is intended for use in places where you want to run independent, full-service production environments (ex. your own Big Bang cluster) but you need help tracking, caching & disseminating system / dependency updates.

📦 Out of the Box Features​

This quick start requires you to already have home brew package manager installed on your machine. For more install options please visit our Getting Started page

Zarf is being actively developed by the community. Our releases can be found here.